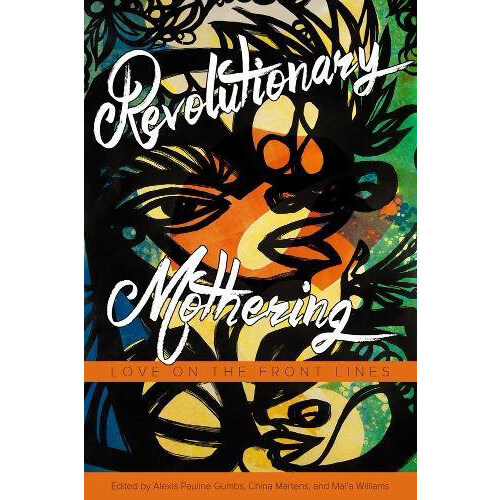 Inspired by the legacy of radical and queer black feminists of the 1970s and ’80s, Revolutionary Mothering places marginalized mothers of color at the center of a world of necessary transformation.

The challenges we face as movements working for racial, economic, reproductive, gender, and food justice, as well as anti-violence, anti-imperialist, and queer liberation are the same challenges that many mothers face every day. Oppressed mothers create a generous space for life in the face of life-threatening limits, activate a powerful vision of the future while navigating tangible concerns in the present, move beyond individual narratives of choice toward collective solutions, live for more than ourselves, and remain accountable to a future that we cannot always see.

Revolutionary Mothering is a movement-shifting anthology committed to birthing new worlds, full of faith and hope for what we can raise up together.

Alexis Pauline Gumbs was named one of UTNE Reader’s 50 Visionaries Transforming the World in 2009, a Reproductive Reality Check Shero, a Black Woman Rising nominee in 2010, and was awarded one of the first-ever Too Sexy for 501c3 trophies in 2011. She is a cocreator of the MobileHomecoming experiential archive and documentary project, which has been featured in Curve Magazine, the Huffington Post, in Durham Magazine, and on NPR. She lives in Durham, North Carolina.

China Martens is the author of The Future Generation: The Zine-book for Subculture Parents, Kids, Friends and Others, and coeditor of Don’t Leave Your Friends Behind: Concrete Ways to Support Families in Social Justice Movements and Communities. She was a cofounder of Kidz City, a radical child care collective in Baltimore (2009–2013). She lives in Baltimore, Maryland.

Mai’a Williams is the creator and director of Water Studio which supports and cocreates with underground community artists and revolutionaries in Cairo, Egypt. Her essays, short stories, and poetry have appeared in publications such as make/shift, Mamaphiles, Popshot, and Woman’s Work. She is the instigator of the Outlaw Midwives movement, zines, and blog, and is the author of the anthology Revolutionary Motherhood, which became the inspiration for Revolutionary Mothering.

Be the first to review “Revolutionary Mothering: Love on the Front Lines” Cancel reply
Related Products