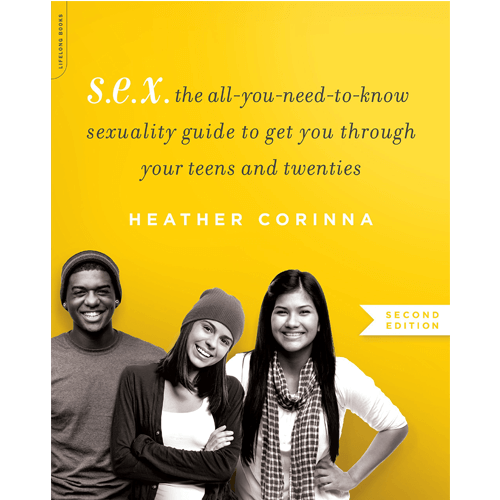 The go-to sex ed guide for teens and young adults, tackling everything you want to know about sex, from consent, safe sex, emotional health and more, from the founder of scarleteen.com.

As a teen or emerging adult, dealing with all the changes going on in your life, body, and mind can be mighty overwhelming. When it comes to sex, everyone seems to have strong feelings and opinions about who you should be and what you should (shouldn’t) do. How do you decide who to listen to?

Whatever your gender or sexual identity, whether you’ve already been actively exploring your sexuality or are only just getting curious, S.E.X clearly spells out what you need and want to know–no shame, no judgement, just comprehensive and accurate info in a clear, straightforward language.

S.E.X. tackles all the big topics:

For over two decades, Heather Corinna and Isabella Rotman have been widely recognized as a leader in sexuality information, education and support for young people.Previously an early childhood educator, Heather founded and directs the international organization Scarleteen (scarleteen.com), one of the very first sources of comprehensive sexuality and relationships education online, a resource that stands alone in its tenure, approach, reach, inclusivity and scope. Heather was also an educator and counselor for the Cedar River Clinics and a contributing editor for the 2011 edition of Our Bodies, Ourselves. They’ve been awarded The Champions of Sexual Literacy Award for Grassroots Activism (2007), the Society for the Scientific Study of Sexuality, Western Region’s Public Service Award (2009), the Our Bodies, Ourselves’ Women’s Health Heroes Award (2009), the Joan Helmich Educator of the Year award (2012), the Woodhull Foundation’s Vicki Award (2013), the Steinem-Waters Award (2015) and the Golden Brick Award (2015). Heather lives and works in Chicago.

Be the first to review “S.E.X: The All-You-Need-To-Know Guide” Cancel reply