Let’s Be Weird Together 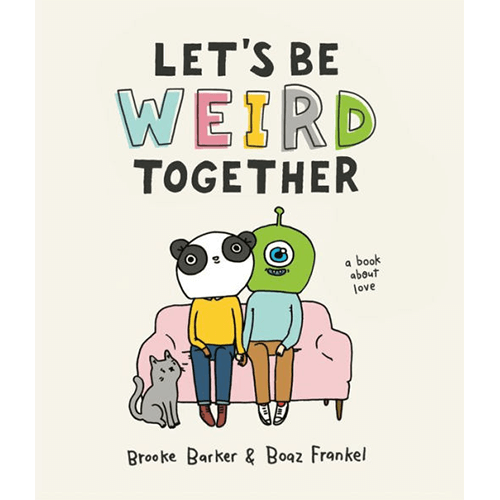 Let’s Be Weird Together: A Book About Love

Weird meets weird—and the rest is history! This is a book about weird couples and the tiny two-person universes they create.

It’s about accidentally wearing the exact same outfit. It’s about made-up songs. It’s about your rules for the thermostat. It’s about breakfast rituals, and funny nicknames, and long hugs, and that voice you pretend the cat has.

Let’s Be Weird Together: A book About Love. Hardcover. 112 Pages.
Brooke Barker is the creator of the Sad Animal Facts Instagram account and author of the New York Times–bestselling book of the same name and its sequel, Sad Animal Babies. Brooke has contributed to the New York Times, Lenny Letter, The Guardian, Cup of Jo, The Stranger, and more. Her books have been translated into nine languages and her comics have been featured in New York Magazine, Forbes, Bustle, Entertainment Weekly, Fast Company, Mashable, POPSUGAR, Parade, and The Guardian, among others. Brooke currently works as a freelance writer and illustrator.
Boaz Frankel is a filmmaker, writer, and talk show host. For six years Boaz hosted the Pedal Powered Talk Show, a talk show built into a bicycle that travelled all over the United States. When Boaz isn’t breaking Guinness World Records for the most high fives in an hour, appearing on NBC’s TODAY Show, or starring in a Dutch television segment called Boaz Goes Dutch, he creates quirky documentaries, curates a kazoo museum, and takes Kip (Boaz and Brooke’s dog) on long walks.
Additional information