Back to InstructionalMediaSex Politics And Culture 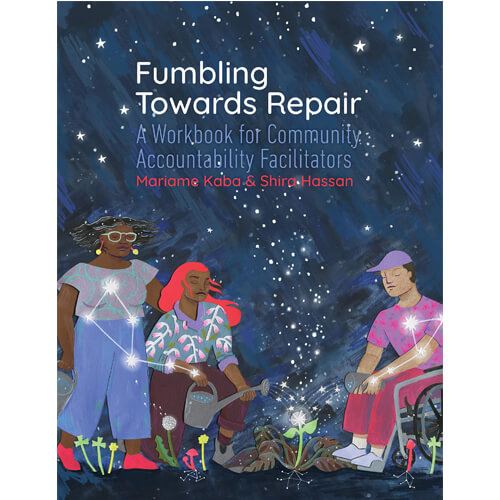 Back to InstructionalMediaSex Politics And Culture

Fumbling Toward Repair is a workbook by Mariame Kaba and Shira Hassan that includes reflection questions, skill assessments, facilitation tips, helpful definitions, activities, and hard-learned lessons intended to support people who have taken on the coordination and facilitation of formal community accountability processes to address interpersonal harm & violence.

Not for beginners! This workbook is intended for people with experience in community accountability work, whether as formal or informal facilitators, mediators, and survivors’ support people. It’s the book the creators wish they’d had when they were first starting out.

The exercises focus on self-accountability, assessing and growing your own skills, deciding whether or not to get involved, troubleshooting common problems, and improving your grasp of the technical nuts and bolts of accountability. Includes exercises to do on your own, with survivors, with perpetrators, and with your team.

Packed full of stories, perspectives from many people and situations, example documents, and more. This resource is deeply thoughtful, practical, and full of heart for the people who find their calling is to try to help mend the most broken relationships.

Mariame Kaba is the founder and director of Project NIA, a grassroots organization with a vision to end youth incarceration. Mariame is also a co-organizer of the Just Practice Collaborative, a training and mentoring group focused on sustaining a community of practitioners that provide community-based accountability and support structures for all parties involved with incidents and patterns of sexual, domestic, relationship, and intimate community violence. Her writing has appeared in numerous publications including The Nation Magazine, The Guardian, The Washington Post, In These Times, Teen Vogue, The New Inquiry and more. Mariame uses her extensive experience with issues of racial, gender and transformative justice to catalyze various projects.

Shira Hassan is the former executive director of the Young Women’s Empowerment Project, an organizing and grassroots movement building project led by and for young people of color that have current or former experience in the sex trade and street economies. A lifelong harm reductionist and prison abolitionist, Shira has been working on community accountability for nearly 25 years and has helped young people of color start their own organizing projects across the country. Shira’s work has been discussed on National Public Radio, The New York Times, The Nation, In These Times, Bill Moyers, Scarleteen, Everyday Feminism, Bitch Media, TruthOut and Colorlines.

Be the first to review “Fumbling Towards Repair” Cancel reply