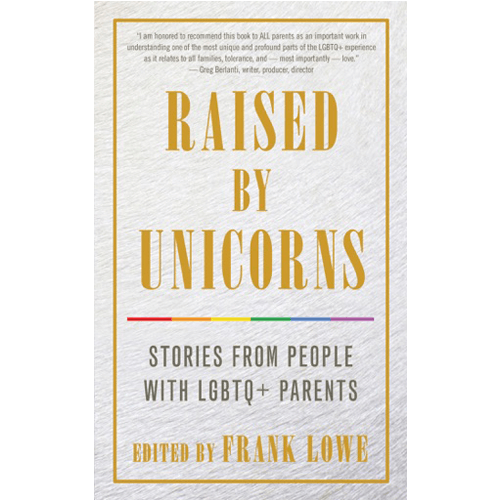 Stories From People with LGBTQ+ Parents

In recent years, the world has been saturated by endless blogs, articles, and books devoted to the subject of LGBTQ+ parenting. On the flip side, finding stories written by the children of LGBTQ+ parents is akin to searching for a needle in a haystack.

Now that the world is more accepting than ever of non-traditional families, it’s time to create a literary space for this not-so-unique, shared, but completely individual experience.

In Raised by Unicorns: Stories from People with LGBTQ+ Parents, Frank Lowe has carefully edited an anthology that reflects on the upbringing of children in many different forms of LGBTQ+ families. From Baby Boomers to Generation Z, it features diverse stories that express the distinctiveness of this shared journey and of each particular family. It’s visceral, raw, and not always pretty, but love is always the common thread.

Lowe candidly reveals true accounts of this particular niche of humanity, while simultaneously creating a moving snapshot of the world in which we live. Raised by Unicorns guides the reader through an empathetic journey that is nothing short of compelling and poignant. We’ve all heard the phrase “raised by wolves.” Now we have a window into the complex world of being Raised by Unicorns.

Frank Lowe is a gay, divorced, 41-year-old dad. He is best known for his acerbic handle on Twitter and Instagram (@GayAtHomeDad), and has worked for publications such as The Advocate, HuffPost, and Gays with Kids. His goal is to bring attention to the world of gay parenting. As a result, he has been interviewed by CNN, CBS, OUT, Ozy, HuffPost, and The Today Show, to name a few. He currently lives in Northwestern Connecticut with his precocious 8-year-old son.

Be the first to review “Raised by Unicorns” Cancel reply