Speaking Out: Queer Youth in Focus 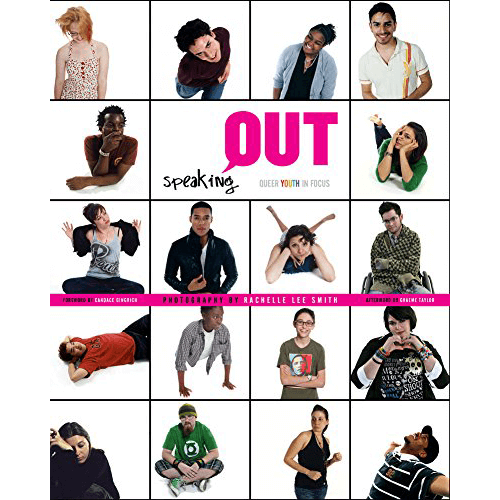 A photographic essay that explores a wide spectrum of experiences told from the perspective of a diverse group of young people, ages 14–24, identifying as queer (lesbian, gay, bisexual, transgender, or questioning), Speaking OUT: Queer Youth in Focus presents portraits without judgment or stereotype by eliminating environmental influence with a stark white backdrop.

This backdrop acts as a blank canvas, where each subject’s personal thoughts are handwritten onto the final photographic print. With more than 65 portraits photographed over a period of 10 years, the book provides rare insight into the passions, confusions, prejudices, joys, and sorrows felt by queer youth and gives a voice to an underserved group of people that are seldom heard and often silenced.

The collaboration of image and first-person narrative serves to provide an outlet, show support, create dialogue, and help those who struggle.

Rachelle Lee Smith is an award-winning, nationally and internationally shown and published photographer. Her work in Speaking OUT combines her passions for activism and photography to tell the stories of, and provide a rare insight into, the lives of queer youth. She lives in Philadelphia.

Candace Gingrich is an LGBT rights activist with the Human Rights Campaign. Her involvement in the movement for queer equality began when her brother, Representative Newt Gingrich, R-Georgia, was elected House speaker. She lives in Hyattsville, Maryland.

Graeme Taylor skyrocketed to international attention when he confronted a school board for not defending gay rights in its schools. Furthermore, he became one of the youngest and most widely known openly gay teens in America. He was interviewed on MSNBC’s Jansing & Co. as well as the Ellen Degeneres Show and is now the subject of a short film, Shrug. He lives in Ann Arbor, Michigan.

Be the first to review “Speaking Out: Queer Youth in Focus” Cancel reply