View cart “The Remedy” has been added to your cart.
Back to MediaSex Politics And Culture 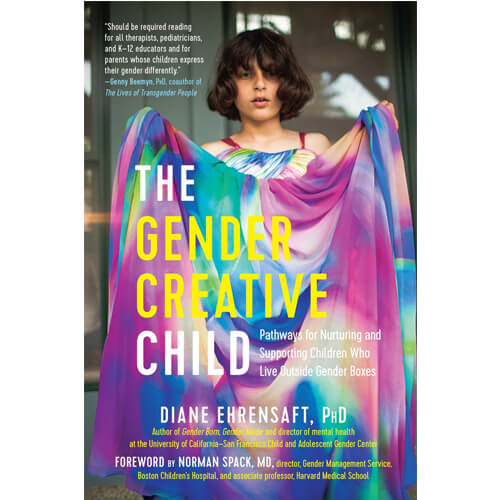 In her groundbreaking first book, Gender Born, Gender Made, Dr. Diane Ehrensaft coined the term gender creative to describe children whose unique gender expression or sense of identity is not defined by a checkbox on their birth certificate. Now, with The Gender Creative Child, she returns to guide parents and professionals through the rapidly changing cultural, medical, and legal landscape of gender and identity.

In this up-to-date, comprehensive resource, Dr. Ehrensaft explains the interconnected effects of biology, nurture, and culture to explore why gender can be fluid, rather than binary. As an advocate for the gender affirmative model and with the expertise she has gained over three decades of pioneering work with children and families, she encourages caregivers to listen to each child, learn their particular needs, and support their quest for a true gender self.

The Gender Creative Child unlocks the door to a gender-expansive world, revealing pathways for positive change in our schools, our communities, and the world.

“The Gender Creative Child is an invaluable resource for families and practitioners wanting to understand the complexity and beauty of gender development and the value of affirmative care.  I’m struck that Dr. Ehrensaft’s most revolutionary idea is also her most straightforward—if we really learn how to listen to our children, they will tell us what they need.”
—Aron Janssen, MD, director and founder NYU Gender and Sexuality Service

“The Gender Creative Child should be required reading for all therapists, pediatricians, and K-12 educators and for parents whose children express their gender differently from societal expectations. Diane Ehrensaft deftly shows that many trans and gender-nonconforming children can be identified from a young age and how critical it is to provide support to them.”
—Genny Beemyn, PhD, trans educator and coauthor of The Lives of Transgender People

Diane Ehrensaft, PhD,is a developmental and clinical psychologist. At the University of California–San Francisco, she is the cofounder and director of mental health at the Child and Adolescent Gender Center, an associate professor of pediatrics, and an attending psychologist at the Benioff Children’s Hospital Child and Adolescent Gender Clinic. Her work with—and advocacy for—gender creative children has been widely covered, including by The New York Times, the Huffington Post, and NPR. She has been featured on the Los Angeles Times online, Wired online, and has appeared on Anderson, The Oprah Winfrey Show, and The Today Show.

Norman Spack, MD, is the director and cofounder of the Gender Management Service clinic at Boston Children’s Hospital, the first US clinic to medically treat transgender children. Dr. Spack has helped pioneer the use of hormone blockers to delay puberty and of hormone replacement therapy in teens. He has received national attention for his 2014 TEDx Talk “How I Help Transgender Teens Become Who They Want to Be” (over one million views) and was featured in Diane Sawyer’s landmark interview with Bruce (now Caitlyn) Jenner. Dr. Spack is associate professor of pediatrics at Harvard Medical School.

Be the first to review “The Gender Creative Child” Cancel reply