The Tricky Art of Co-Existing 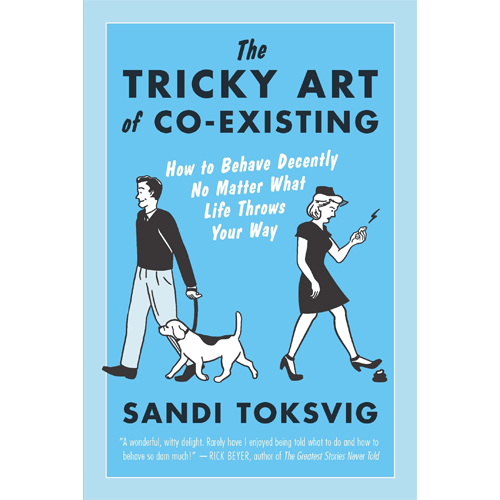 No one learns “etiquette” anymore (except by embarrassing trial and error). But manners are more than a dusty tradition: Done right, they make life easier—for everyone!

That’s why Sandi Toksvig highlights decency rather than convention in this entertaining guide! She will offer spot on advice, like “Remember—you don’t have to answer the phone, so don’t do it if you don’t have time to be polite.” Also learn fascinating trivia, like “It is very rude to clear the plate of someone who hasn’t finished. In fact, the Romans believed doing so would bring about the diner’s sudden death.”

With the author’s trademark wit, you’ll be the most decently behaved person in the room, and the most interesting, once you’ve mastered The Tricky Art of Co-Existing!

Sandi Toksvig, OBE, is an award-winning writer, presenter, actress, and politician. She is often seen and heard on the BBC and has hosted several of its shows, including The Great British Bake Off (available in the US on PBS and Netflix), which she has co-presented since 2017. The author of more than twenty books and a regular columnist for the UK edition of Good Housekeeping, Toksvig is a “national treasure” (The Guardian). She was named Chancellor of the University of Portsmouth in 2012, and in March 2014 was awarded the prestigious title of OBE (Officer of the Most Excellent Order of the British Empire). A true authority on successfully co-existing with others, Toksvig is now helping launch the Women’s Equality Party in the UK to campaign for women’s rights.