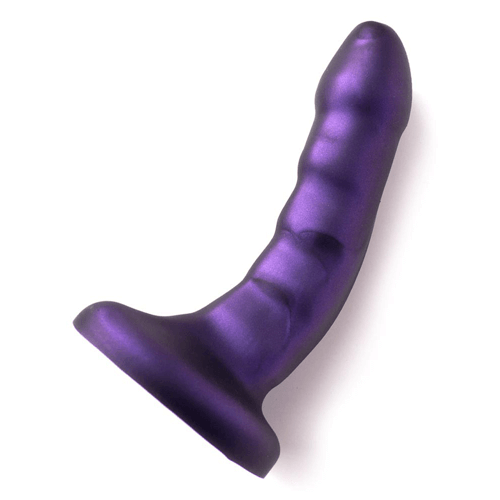 [Shown: The Curve by Tantus, designed to be a fantastic G-spot toy!]

Where is the G-Spot?

The G-Spot, also called the Gräfenberg spot for German gynecologist Dr. Ernst Gräfenberg who in 1944 claimed to have discovered it, is an erogenous zone located within the vagina. When stimulated, the G-Spot is said to produce high levels of sexual arousal and mind-blowing, even ejaculatory, orgasms.

The G-Spot is thought to be located directly behind the pubic bone surrounding the urethra. It is accessible through the anterior or front wall of the vagina. Sometimes likened to an accessory clit, the G-Spot is thought to be best stimulated by deep massage of the mons veneris, or by using a massage tool specifically designed to reach up and under the pubic bone. Both the G-Spot and the clitoris are believed to share a common nerve, and the stimulation of one is often described as stimulating the other.

Whether or not the G-Spot actually exists remains an open question as both the medical and scientific community publish papers either confirming its existence or disputing it. [Editorial note: Recent news stories have highlighted that a researcher has claimed to actually found the G-Spot.] Many believe its for real and popular sexology books take for granted its existence. The G-Spot may actually be the Skene’s gland, sometimes called the “female” prostate.

Before you get too hung up searching for your G-Spot, consider other “spots” that have attracted sexual researchers attention. The “A-Spot,” or Anterior Fornix Erogenous Zone, is a newly discovered and recognized patch of sensitive tissue located at the deepest point of the front wall of the vagina, between the cervix and the bladder. Direct stimulation of this spot can lead to delicious, multiple orgasms.

There are a number of sex toys and aids designed to massage the G-Spot. The high volume of sales of these items would seem to indicate that many wish to be in more touch with their G-Spots. Check it out!

Eve Marx is the author of “101 Things You Didn’t Know About Sex,” “Flirtspeak,” and “The Goddess Orgasm.”

View all posts by Adisson →