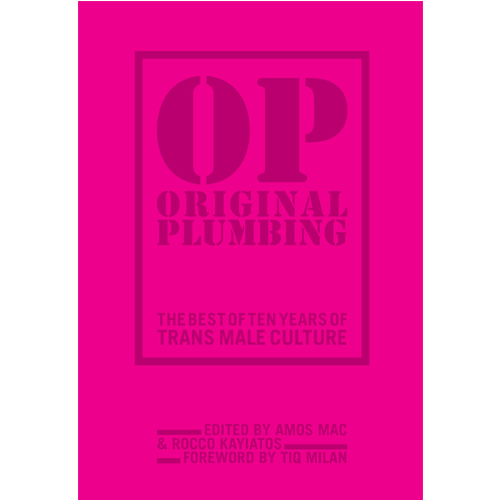 The Best of Ten Years of Trans Male Culture

A dynamic celebration of trans male culture, this essential collection makes visible a decade of FTM and transmasculine experiences.

Independently published from 2009 to 2019, Original Plumbing grew from a Bay Area zine to a nationally acclaimed print quarterly dedicated to trans men. For nearly ten years, the magazine was the premier resource focused on their experiences, celebrations, and imaginations, featuring writing on both playful and political topics like selfies, bathrooms, and safer sex; interviews with queer icons such as Janet Mock, Silas Howard, and Ian Harvie; and visual art, photography, and short fiction.

In celebration of the magazine’s ten-year run, this essential collection compiles the best of all twenty issues. Selections are reprinted in full color, with an introduction by activist Tiq Milan and a new preface by the founding editors.

Amos Mac is a writer, artist, and producer based in Los Angeles. His photography has been featured in publications including the New York Times, Interview, Vogue Italia, and OUT. A love of storytelling influenced his leap into television, where he works across scripted and documentary series.

Rocco Kayiatos is a writer, organizer, educator, and former hip hop artist (stage name Katastrophe). He was the head of the video education department at BuzzFeed and continues to produce content in the new media space. He is a man of trans experience who began his transition in 2001.

Be the first to review “Original Plumbing” Cancel reply